Do you have a flea infestation?
We can help

Have you got a Flea Problem?

Fleas & ticks are small, parasitic insects. Adult fleas are blood suckers, the majority of species feeding on mammals (eg, dogs, cats and pigs) and some feeding on birds.

Fleas prefer warm, humid conditions and hence are often a pest during summer. The high humidity favours the development of larvae.

Buildings left empty for long time periods can suddenly become alive with fleas immediately after occupants return. Vibrations from movement by humans or pets in the building signals its presence, stimulating the fleas  who go looking for their meal.

Fleas pest status is achieved by their biting (piercing and sucking) habit which can cause mild to severe irritation or serve to transmit diseases.

Where flea infestation is troublesome most flea bites occur around the ankles and lower legs. The irritation which can persist for days, is due to the injection of saliva by the flea which acts as an anti-coagulant. A cluster of bites can occur these usually develop into a small red spot, surrounded by a reddish halo.

Plague – The bubonic plague claimed untold millions of human lives during the Middle Ages. The disease was normally carried via rats. The bacterium is transmitted from one rat to another via fleas, when an infected flea regurgitates while feeding on an uninfected new host. Instances of the plague still occur but fortunately it has been avoided in Australia for many years.

Intestinal Worm Parasites – It is believed fleas play some role in dog and rodent tapeworm. Occasional infection of children is well known. 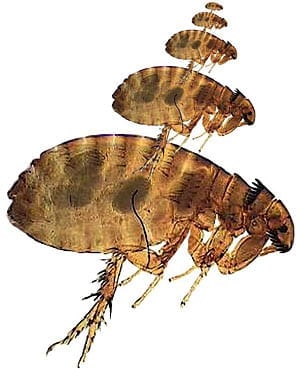 Let us take the bite away by eliminating the flea problem

REQUEST A CALL BACK